Home / Missions / Missions: A Humble Journey Towards A New Creation

Missions: A Humble Journey Towards A New Creation

Missionary work frequently involves the determined pursuit of a godly vision or some compelling understanding of “what God wants us to do” for His name. This guiding vision or theological understanding then governs the rest of the activities of the mission agency. So it is of paramount importance that we get the vision right.

Unfortunately this is not always the case and sometimes some very theologically inadequate metaphors (e.g. metaphors dependent on over-realized eschatology, or the prosperity gospel, or soulless corporate success metaphors) take center stage. Therefore I would like to suggest the metaphor of the New Creation as a guiding vision for missions.

In the New Creation metaphor the missionary is taking the old creation, the old fallen order of things and transforming it into the new creation and into the heavenly order of things. By the power of the message of the gospel God creates persons who are new creations in Christ, and forms them into a unified cross-cultural community that Paul calls a “new humanity” (Ephesians 2:12-22), who then live under a New Covenant, and eventually inherit a new heavens and a new earth. The missionary is simply a co-worker with God in His New Creation.

The glorious New Covenant is different from the Old Covenant that is “passing away” with its priestly hierarchy, temple-building programs, and ecclesiastical grandeur. The New Covenant is a community-building, mustard-seed covenant of forgiveness, love and hope in which the temples are people and where God dwells in the midst of them during their gatherings for prayer and worship and mutual edification. In the New Covenant people are taught by God and have the law written on their hearts as new beings and transformed creations who are connected to God in the depths of their spirituality (Hebrews 8:8-13). Thus New Covenant ministry seeks to do an interior work rather than an exterior work. It produces spiritual fruit such as reconciliation, community, love and joy rather than the mere completion of institutional programs and agendas.

This metaphor is about a major transformation in personhood and in community under a new set of values and ethics. Central to this is the cross and the notion of dying to self. The personal ego must die. In this new creation, people are humble, meek, and lowly servants of those who they minister to. There is no domination, no “lording it over” and no missionary imperialism. The missionary, like Paul, is someone who is crucified to the world (Galatians 5:24, 6:14), who leaves its values behind, and who does not exalt themselves over others or seek personal glory.

The missionary thus becomes a humble, redemptive servant of those made new in Christ. He or she becomes someone who offers both death and life. Death to the ego, death to the world and to self, death to the “kosmos” and its powers. But to those who are seeking salvation, the missionary is the fragrance of new life (2 Corinthians 2:14-16).

The New Creation metaphor also applies to the spiritual depth and quality of those that we send to the field. In Matthew Jesus speaks of those who tried to make converts without being new creations themselves: Matthew 23:15 HCSB "Woe to you, scribes and Pharisees, hypocrites! You travel over land and sea to make one proselyte, and when he becomes one, you make him twice as fit for hell as you are!" Thus evangelistic efforts can have negative spiritual consequences if the missionary (who travels over land and sea) is not redeemed and simply inculcates the convert into an inadequate and grace-less spiritual paradigm.

One of the key tests for authentic missionary work lies in the concept of the cross, of “death to self” and in the renunciation of the sense of personal significance. For the pursuit of personal significance through religious activity is what causes the ruin of much missionary work. Jesus was meek, humble and lowly of heart (Matthew 11:29) and Paul was content to be as “the scum of the earth, and the offscouring of all things” (1 Corinthians 4:13). This is a huge challenge to the “old nature” - and it must die in the process. Missionaries need to ask themselves - is humility a possibility - or is missions about changing the world and achieving some glorious personal destiny? Is their personal ego still in the driving seat?

If the ego has been crucified then boastful measures of missionary worth (such as size of ministry, glamor, status, budget, “being cool”, expensive facilities etc) will have no attraction and will not be employed. The missionary will instead focus on truly spiritual measures such as those mentioned by Paul in Ephesians 4 – maturity, stability, Christ-likeness, wisdom, knowledge, abiding in the truth and so on.

New life where it exists, will be manifest in sincerity and truth, and in love - shown in meekness, humility, lowliness and graciousness in a life full of faith and hope. As we adopt the New Creation metaphor in missions we will become sensitized to the need to die to self ourselves - and to give birth to communities full of new life, godly hope and love. The New Creation metaphor focuses us on issues of spirituality, on the inner dynamics of the Christian life and on the quality of discipleship and church life. This will bring great health to the missionary enterprise and save us from destructive, egotistic patterns of behavior and organization.

In 1 Corinthians 3 Paul exhorts Christian workers to “be careful how you build” on the foundation that is Christ. He goes on to talk about ministries that were mere “wood, hay and stubble” versus those that were “gold, silver and precious stones”. Paul implies that large, shallow ministries of low quality were like giant “haystacks” - easily built in a day but of no worth. One thinks of the once immense PTL ministries of Jim and Tammy Bakker, and of other fallen televangelists as being in the “haystack” category. On the other hand ministries that are built with “precious stones” do a finer and more intricate and often smaller work of much higher quality. A Fabergé egg or a diamond ring is much smaller than a haystack – but much more precious! One thinks of Mother Teresa's work in Calcutta as being in this category. Work that is deep, lasting, loving and humble. This kind of high quality ministry is what God call us to!

The New Creation metaphor puts more emphasis on the organism, than on the organization, and more emphasis on spiritual life than on structures and results. It reminds us that we are separate from the world and though we live in it, we are there to redeem it and to save it from itself. We are new persons in a new community that exemplifies a new humanity living that is dwelling under a glorious new covenant with God (2 Corinthians 3:6-18). We become part of God's plan to renew all of Creation and bring it into the glorious liberty of the sons of God (Romans 8:16-22).

Thus the missionary becomes part of God's creative agenda, a new being, forming new communities that are different to the surrounding cultures of the world. New Creation missions thus never just replaces one culture with a better human culture, as in “civilizing” people. New Creation missionary work declares that the Kingdom of God is at hand and prevails upon people to enter into it and and to experience directly and personally its healing, restoring and redeeming powers. Such missions will take seriously the task of confronting the principalities and powers of this world. 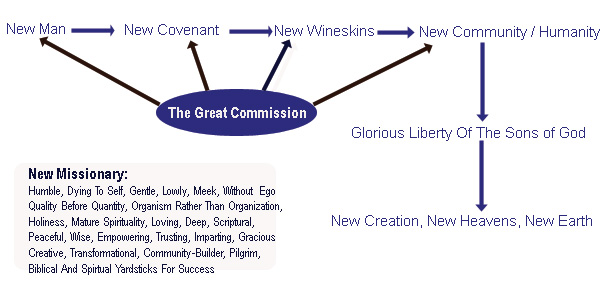 Our ministry vision needs to be more than a business-like success and effectiveness orientation or a mere imitation of other successful ministries. The ministry vision has to be theological, teleological, ethical and practical – that is it has to proceed from our understanding of God, salvation history and purpose, Christian values and lifestyle. The New Creation metaphor places us as new Christ-like beings who are working out a new creation as part of redemptive history. It thus informs our faith, our purposes, our ethics and our day to day living as saints of God.

Missionaries are, by definition, people on a journey, ones "sent out” by God with His gospel, to bring the nations to faith. Is this journey a triumphal imperialistic crusade – or a humble mustard-seed like beginning of a new creation? I submit that the missionary journey is best thought of as a humble and selfless one. A journey of faith, a spiritual pilgrimage.

We also need to ask “where are we going?” in this journey. Is the destination “a grand ministry”, “a large church”, “a church-planting movement”, “a million decisions for Christ” or the formation of a new creation in partnership with God? These other goals have their place but they are not fully adequate, they are in fact just sub-goals of the main goal of a world renewed and covered with the glory of God.

I think we need to serve a brighter vision – one that makes deep spiritual demands on us and which puts a full-orbed spirituality right back in the heart of missionary work. We still need anthropology, linguistics, and church-growth and communication theory but they are empty if we are empty of the fullness of Christ. We need an ultimate guiding vision that calls us to not just be “more effective” - but also to be more holy and saintly and gracious and humble. A vision that reminds us that we are not of this world, but are in fact citizens of a heavenly realm, new creations in Christ, doing good works that God has foreordained for us to do (Ephesians 2:10).

© Copyright, John Edmiston 2006 - This article may be freely reproduced for non-profit ministry purposes but may not be sold in any way.

Home   I  About Us   I   Donate   I   Email John Edmiston   I   Statement Of Faith   I   How To Become A Christian  I   Free Ebooks
GlobalChristians.Org is one of the ministries of Cybermissions - a missions agency that uses computers and the Internet to facilitate the Great Commission. We are under a 501 (c) (3) tax-deductible religious non-profit organization in the United States of America.